Preacher on the Run

For Liberty & Conscience #1: A Novel of the Regulator Uprising 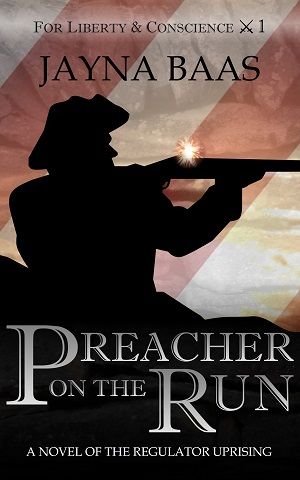 It’s 1771, and North Carolina is at war. On one side stands the power of the Crown. On the other side stands a dangerous freedom of conscience.

Former circuit rider Robert Boothe has spent the last four years leading the tyrant-hating Regulators against North Carolina’s corrupt British government. All he wants is a safe place for his little Baptist church to worship God.

But when Colonel Charles Drake arrives in town, Robert becomes a target. The Church of England wants him to shut up. The governor wants him dead.

Now Robert’s church and family are caught in the crossfire. And that safe place is farther and farther away.

“An entertaining, inspiring, and worthwhile read.” —The Old Schoolhouse Magazine

You are viewing the e-book cover design. Minor typographical differences exist between e-book and print versions.

I love to stay in touch with my fellow book-lovers. Join my email list for monthly updates, special content, and a free copy of Promise of Refuge, the exclusive short story prequel to Preacher on the Run!